At the weekend I was down in London campaigning with one of my best friends and current candidate for the position of London Mayor Sadiq Khan. I have been very good friends with Sadiq since University and spent a fascinating day with him campaigning in the Boroughs of Walthamtow and Redbridge. It was a typical day for Sadiq he had a number of newspaper interviews as well as campaigning and attending meetings. The day was ended after an interview at the BBC Studios at Westminister. I have known Sadiq since University and I know him to be a man of integrity both as a very dear friend and as a politician. The support I witnessed for his campaign was genuine and heartfelt. Typically of Sadiq   one of his main issues for the campaign as Mayor is focusing on the social housing issue in London. Sadiq’s policies mean that Londoners will have access to affordable housing in London. Sadiq is fighting against a Conservative candidate and the current Conservative government that have made laws denying social justice to many people in the U.K including Immigration rules that are unfair and harsh for the vast majority of law abiding Applicants.   A typical example of the current   government’s unfair policies are a further announcement of further increases to already high immigration fees which are due to come into force in April 2016. I will unreservedly urge any of our clients who are based in London to vote for Sadiq. You can also follow his campaign on Twitter. I will keep you informed about his campaign with the election due to take place at the beginning of May 2016. I have further plans to go down and help Sadiq with his campaign. 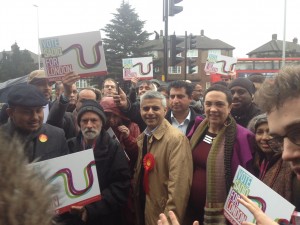 Translate »
We use cookies for various purposes including analytics and personalised marketing. By continuing to use the service, you agree to our use of cookies. - Legal Notice